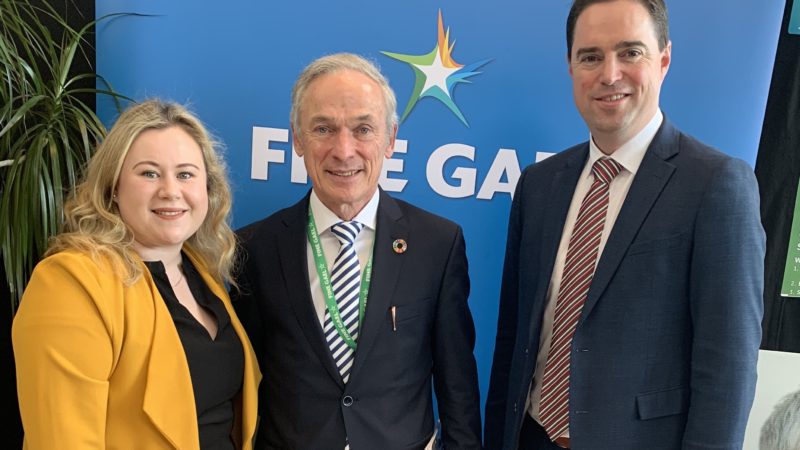 Climate action is something I am very passionate about and I want to assure you that I am committed to tackling climate change. I am aware that both the window to tackle climate disruption is fast closing and the decisions we make now will define the next century. I think over the last few weeks it is great to see young adults from my generation, children, pupils and students telling all of the adults in all parties to get their act together and do more about climate change because it is our future that is in jeopardy.

With regards to the actions I have taken, I have made significant changes to my lifestyle to reduce my own carbon footprint and I am currently looking to change my car to a hybrid. I was hoping to go full electric but the cost is a huge issue for me and I imagine for many other people too. There is an SEAI Grant but the initial cost of the vehicle is still far greater than that of a diesel or petrol car or a hybrid and unfortunately there aren’t many second-hand electric cars on the market, hopefully, as uptake increases, this will too.

Plastic waste makes a major contribution to the chronic problem of pollution, damaging our cities, countryside and oceans. Fine Gael is committed significantly increasing our overall plastic recycling rate to 55% by 2030. For single use plastic drinks bottles, we are committing to a collection rate of 90% by 2029. I myself have cut back on single-use plastic and I put a lot of thought into whether or not I would put election posters up but I ordered far less than the ’recommended’ amount and I have new homes for all my posters after the election. The majority are going to a local school for use by their Green School Committee to make ‘Bug Hotels’ while the rest are going to a local farmer who uses them to insulate a shed and if I do end up having any leftovers I am satisfied that the way they are designed I will be able to reuse them in the future.

In late January Fine Gael announced a review to consider the best model to achieve this ambitious 90% target for single-use plastic drinks bottles. The review will look at the current Irish waste collection system, international best practice in this area and how Ireland can bridge the gap from the targets already being achieved to the new, higher target. The introduction of a Deposit and Return Scheme, and how this might operate in an Irish context, is one option the review will look at. In deciding what approach to take, we want to be sure to learn from international best practice in this area. Once the review has been completed and an approach agreed we will announce the actions which need to be taken.

On the wider issue of plastic pollution, I feel it’s important to highlight some of the actions the Government are already taking, for example:

• Last year we approved legislation to provide for the prohibition of the sale, manufacture, import or export of certain products containing plastic microbeads.

• We launched the Clean Oceans Initiative, which sets a target for 100% of Irish trawlers to recover plastic waste from the oceans on every fishing trip.

• In January we announced that government departments, public bodies, and schools will lead the way in the response to cutting down on single-use plastics, with a number of measures, including no longer purchasing single-use plastic cups, cutlery and straws for use within their offices.

While all projected transitions to a low carbon economy by 2050, gas will continue to play a role. It plays an important role in reducing greenhouse gas emissions in the power generation, industrial and commercial, residential and transport sectors by replacing more Co2-intensive fossil fuels.

In Ireland gas powered generation also provides an important back-up for intermittent renewable wind generation. Therefore while gas usage will reduce significantly in the years ahead, Ireland will still need secure sources of gas. At present this is provided by both gas piped onshore from Irish gas fields and imports through gas pipelines from the UK and Minister Bruton has indicated that at present he has no plans to impose a ban on the use of natural gas derived from any particular source.

In 2017 we published the first National Mitigation Plan. This restates commitment to move from a fossil fuel-based electricity system to a low-carbon power system. It also outlines further investment in further renewable generation. The new Renewable Electricity Support Scheme, approved by the government in July 2018, will provide for a renewable electricity ambition of 55% by 2030. Currently, 30% of our electricity is generated from renewables.

In January 2018, speaking to the European Parliament, the Taoiseach outlined that Ireland has much more to do when it comes to combatting climate change and that work has commenced. Last year, we launched Project Ireland 2040, a long-term plan for Ireland’s future development. Under Project Ireland 2040, €21.8 billion is committed to the objective of transition to a low-carbon and climate-resilient society; this means that 1 in every 5 euros in Project Ireland 2040 will go towards climate action. This is the highest amount allocated to any of the ten national strategic objectives in the plan. As part of Project Ireland 2040, four funds will be established to drive the delivery of core elements of the plan. One of these funds is a Climate Action Fund of at least €500m to support a broad range of innovative projects generating significant Co2 reductions.

Climate change is a real and present threat. It is not tomorrow’s problem and can no longer be treated as such. Record-breaking heat and cold, as well as other extreme weather events,  are on the rise and Ireland is not immune. The Joint Committee on Climate Action is recommending that a series of measures be taken by this and future governments to ensure the safety and prosperity of Irish citizens.

The cross-party report is comprehensive and includes keys sectors such as agriculture, transport, energy generation and the built environment. Particularly significant is the recommendation around a new governance structure which will ensure that these recommendations are implemented, as well as elevating climate action to the same level of importance as finance and budgetary matters. This is a fundamental shift in the way in which the State prioritises and addresses climate action.

Some of the report’s recommendations include:

Governance: The report calls for new legislation, which will set ambitious climate and renewable electricity targets, and which will require five-year carbon budgets to be devised by a new Climate Action Council (which will supersede the existing Climate Change Advisory Council). The new legislation should provide a much stronger framework for the achievement of climate and energy targets and require all public bodies to make climate action a priority.

Carbon pricing: The Committee recommends increasing the existing carbon tax from €20 to at €80 per tonne by 2030 when supports and protection mechanisms are in place, with the increased revenue being ring-fenced separately from general Exchequer funds by legislation.

Energy: Sustainable Energy Communities (SECs) should be provided with appropriate levels of support from the Department of Communications, Climate Action and Environment, SEAI, the Climate Action Regional Offices, and their local authority. There should be an ambitious national target set by the Climate Action Council for installed SEC capacity by 2025 which may be at least 500MW.

• The Committee recommends the establishment of a multi-stakeholder forum for developing programmes and schemes to support diversification in agriculture.

• Expand and strengthen the Smart Farming Programme, Dairy Sustainability Ireland, Agricultural Sustainability Support and Advice Programme, and Origin Green Programme to improve the environmental performance of farms and increase the visibility of these schemes.

• The Government should adopt the 28 measures contained in “a mitigation pathway” produced by Teagasc.

• A target for farm-based tree planting with copses of native trees should be set. A target of 5% would increase our low tree cover by 4% and provide environmental benefits and employment opportunities.